This is a snap shot taken from Quality Shareholders by Lawrence Cunningham. The book elaborates on the actions management can take to attract high quality shareholders. These are the shareholders you want. They load up and stick around.

I like the figure above. I’m visual in nature. The framework highlights the capital allocation decision making process.

A business generates excess cash. What action you take with excess cash will often determine the future returns of the business.

Below are some of my favorite slides from the Fairfax India presentation.

Below is the Bangalore airport. Fairfax India owns 54% of the private airport. 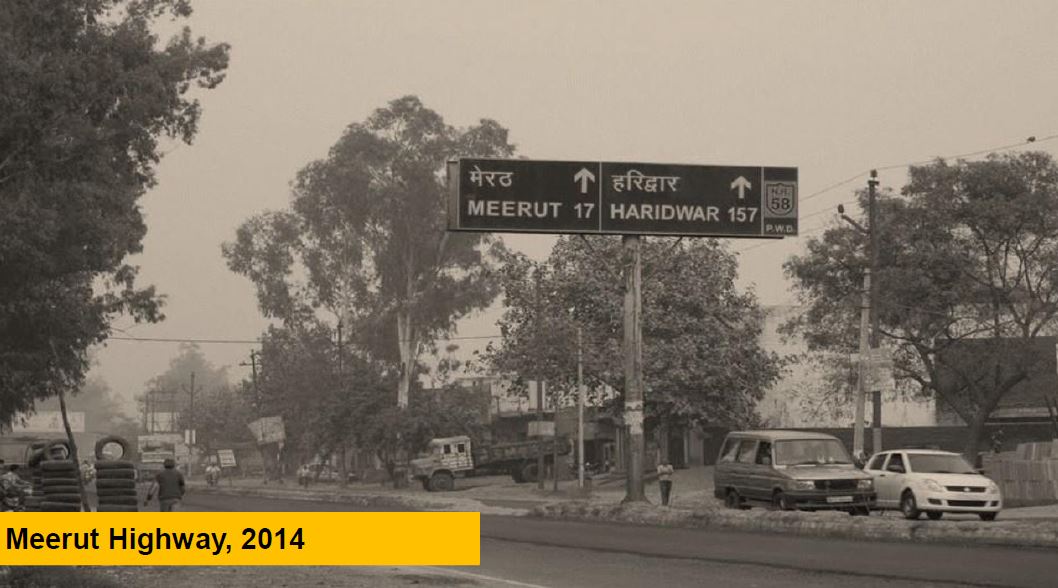 The following picture is not from the Fairfax presentation but capture the same idea: 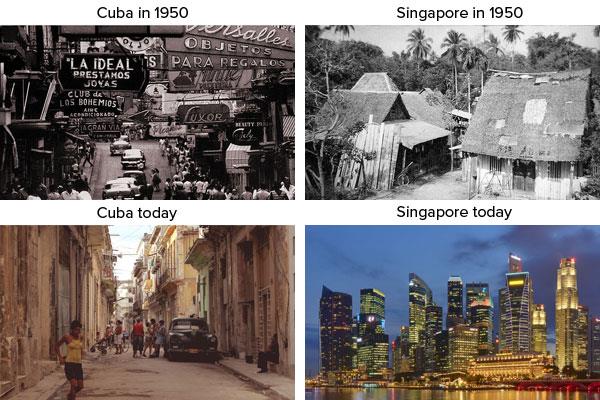 Walter Elias Disney’s corporate vision since it was codified back in 1957. Only two years after the company’s first theme park opened, Walt detailed an expansive vision for Disney – one where every segment of the business worked in concert. 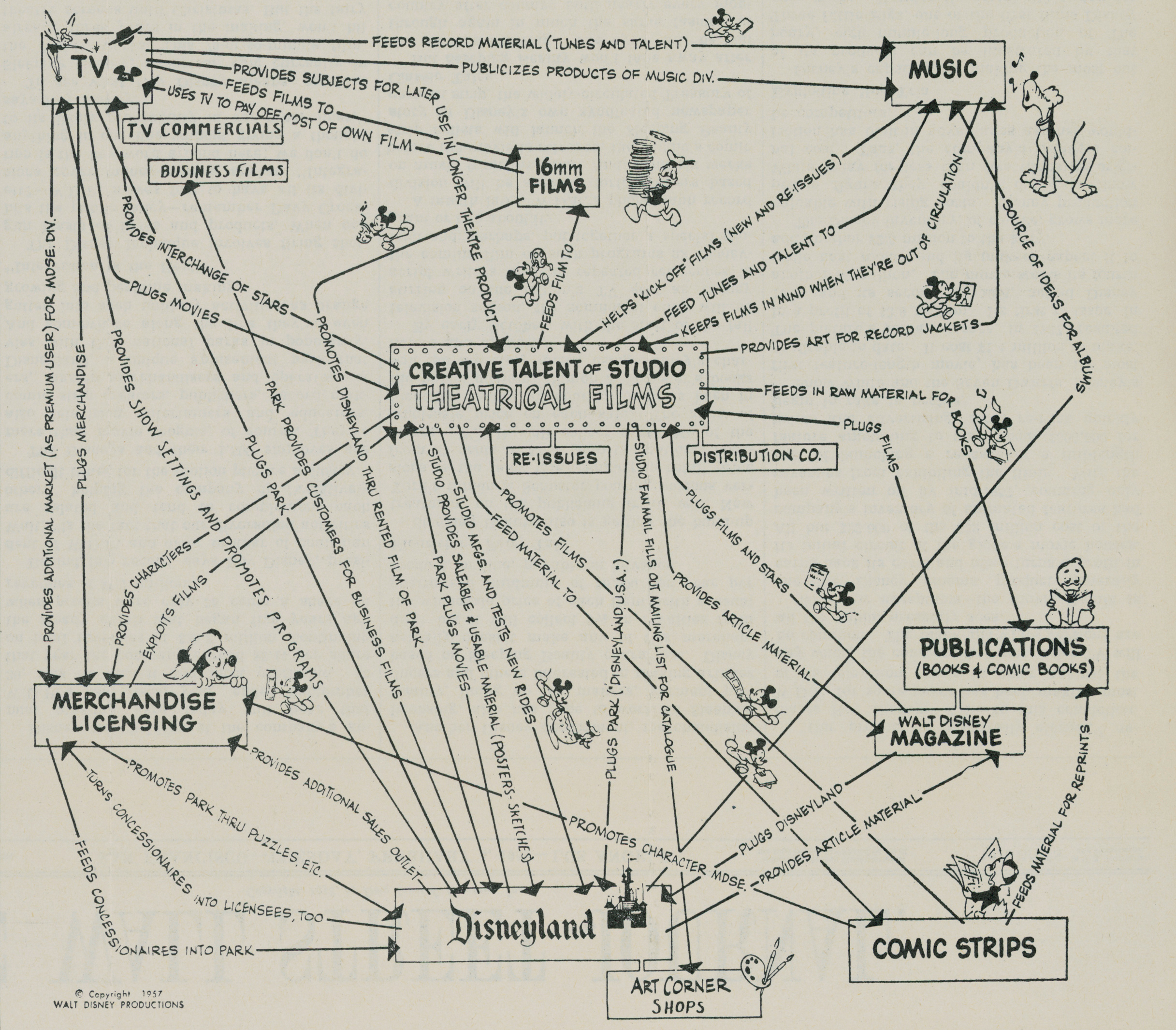 Last Monday I published a post on Warren Buffett’s letter in Barron’s in 1962. I was wondering if it was Buffett’s earliest public appearance. David Shahrestani from the blog Wiser Daily,  found earlier. He posted a link in the comments that led 4 articles published in The Commercial and Financial Chronicle by Warren Buffett during the 1950s.

The articles are in the PDF below. 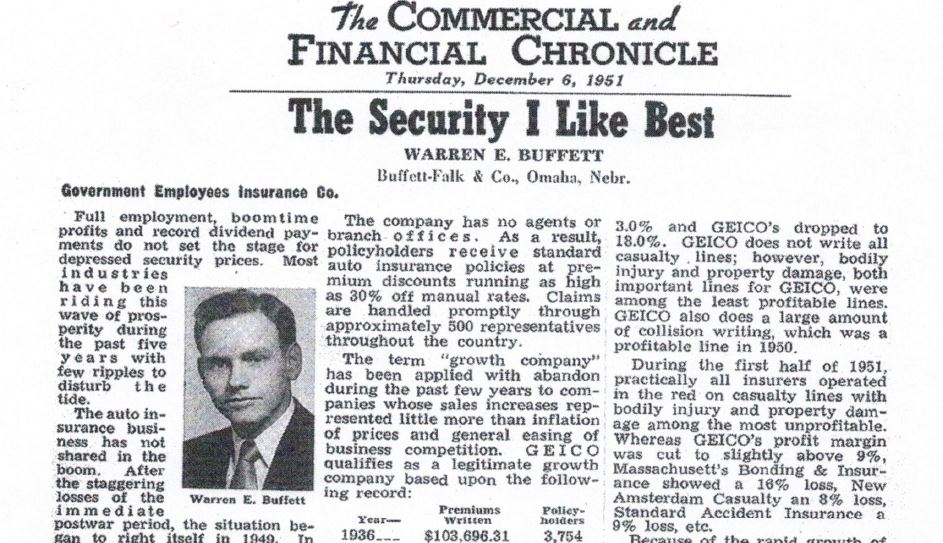 Here are the four stocks that Warren recommended back in the 50s.

1951: GEICO, which is now a big holding in Berkshire Hathaway. 100%+ gained following the publication of the article. Even though it was up 100%, he still though it was cheap.

1953: Western Insurance Securities. Was trading at less than 2x earnings and at 55% book value. He liked it because it was cheap.

1957: Home Protective Co. I couldn’t find anything on what happened to it.

1957: Oil and Gas Property Management. I couldn’t find anything on it either but I didn’t search very hard.

Here’s a gem. Is this one of the earliest public exposure of Warren Buffett? Check it out. The letter is from December 24, 1962 issue of Barron’s.  That’s was back in the days when he was running his partnership. 1962 was also the year he became a millionaire. Look at how detailed oriented his letter is.

Below is a chart of the the most valuable companies of all-time. The amounts have been adjusted for inflation.

The Dutch East India Company (VOC) was a bubble formed from the prospect of trading with faraway lands. The Dutch government granted VOC a monopoly on trade. VOC could acquire exotic goods, establish colonies, create military forces, and even initiate wars or conflicts around the world. Of course, the very nature of these risky ventures made getting any accurate indication of intrinsic value nearly impossible, which meant there were no real benchmarks for what companies like this should be worth.

The VOC also got caught up in the Tulip Mania (The bitcoin of the 1630s.) Despite its 200-year run as Europe’s foremost trading juggernaut – the speculative peak of the company’s prospects coincided with Tulip Mania in Holland in 1637. It’s during that time that the company was worth $7.9 trillion. Eventually the company was nationalized in 1800, and its possessions and debt were taken over by the government.

This sheet of paper was provided at of the Ben Graham Centre’s 2017 Value Investing Conference that I attended last week. Tony Fell, the retired Chairman of RBC Capital Markets & Former CEO, used it during his speech. He was with RBC Capital Markets and its predecessor for 48 years. We often hear and see that M&A is not as successful as it should. We hear that’s it’s the culture or this or that for the main cause of failure. The list below is brief and useful. Here are the major causes of failed acquisitions and how to avoid them. I particularly like point #3 and #12.

I don’t know whom to give the credits to for this chart and it’s getting passed around all over the Internet. The chart includes current legend and investors who are no longer among us.

There’s a name at the bottom right that I’ve never seen before, Philip Carret. I had to look him up and it turned out he was the founder of one of the country’s first mutual funds and a legendary investor who swapped investment ideas with Warren E. Buffett’s father half a century ago. He died at the age of 101. He was known as a longtime proponent of the ”value” style of investing: buying shares of companies with steadily growing earnings, strong balance sheets and committed managers who themselves owned a hefty stake in the company, and then holding onto those investments for many years. According to his obituary he scoffed at the tendency of many younger mutual fund managers to hold a stock for weeks, if not days, which he called ”the pinnacle of stupidity.”

Above we present two views from the same vantage point overlooking the Pudong District in the city of Shanghai – one from 1985 and one from today. The city itself is the home of the world’s newest (and some say grandest) Disneyland. Depicted in the picture is Pudong – literally “The East Bank of the Huangpu River” sitting across from Shanghai’s Old City. The area was originally farmland and only slowly developed, with warehouses and wharves near the shore administered by the districts of Puxi on the west bank. Today, in the bottom picture, note the district packed with skyscrapers, including the iconic Oriental Pearl TV Tower, seen on the left.

Pudong, while today the most populous district in Shanghai with more than five million inhabitants (one-quarter of the population of Shanghai), is still one of its fastest growing. By some accounts, largely due to immigration from other parts of China, Pudong’s population is growing more than 10% annually.

While we consider most domestically domiciled Chinese companies as not yet fully proven through cycles or tested in times of adversity, we believe this could change. We also believe that many Chinese companies are destined to become global players, either now or soon, competing around the world. For these reasons, and as part of our long-term process, we shall keep a watchful eye on the country and its growing number of employee-owned enterprises.

This reminds me a lot of a similar picture that showed Cuba and Singapore at different point in time. The picture is pretty self explanatory. A pure case study of capitalist versus central planning. I wrote a post about it last year here: A Tale Of Two Economies: Singapore And Cuba

With inflation surprisingly low, the Federal Reserve still raised interest rate this week. It has been almost a decade since the last rate hike. They must be confident that the U.S. economy is stronger than it looks. While on the topic of inflation, below are two graphs of interest.

In 1974, the economist Herbert Stein, then a top adviser to President Richard Nixon, called inflation “a Hydra-headed monster” that “came in various forms—sometimes led by wages, sometimes by prices, by foods, by oil; sometimes it was domestic and sometimes imported.”

Below is a chart of U.S. inflation since 1775. You will notice that we haven’t suffered a period of deflation since the Federal Reserve was created in 1913. The violent drop and rise in inflation and deflation is also gone.